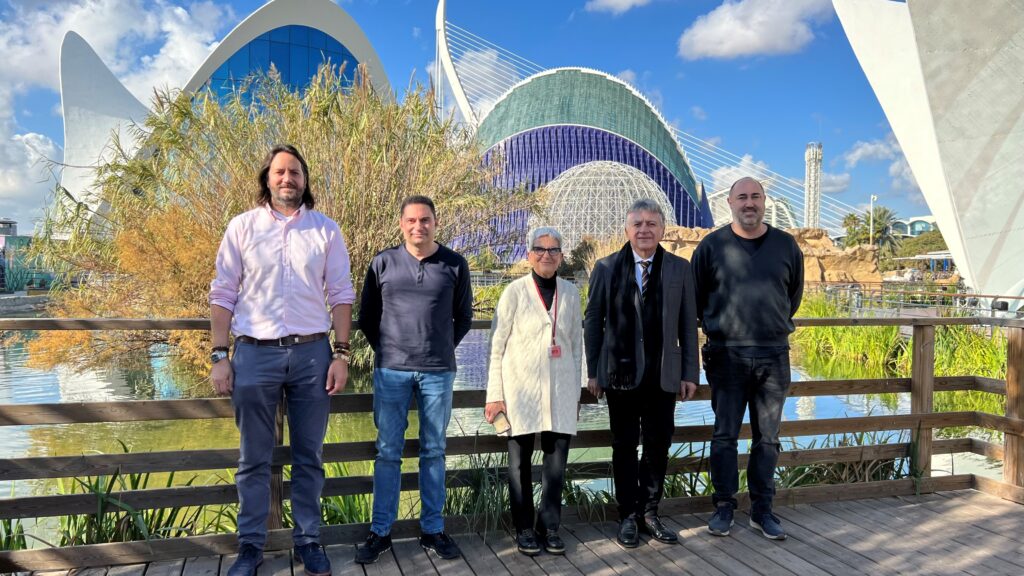 The study at the Oceanogràfic will be carried out in two aquariums with identical ecosystems and different CO2 levels, and an analysis method that is not harmful to the animals will be used.

The Project will be carried out by a multidisciplinar collaboration led by the Instituto de Física Corpuscular (IFIC, CSIC-UV), in which the Valencian aquarium, the Instituto de Acuicultura Torre la Sal (IATS) and the Italian Istituto Nazionale di Fisica Nuclear (INFN-LNL) participate.

The increase in ocean acidification is caused by the increase in carbon dioxide emissions into the atmosphere, causing serious consequences for marine fauna.

The Instituto de Física Corpuscular (IFIC), a joint research centre of the National Council for Scientific Research and the University of Valencia (CSIC-UV), will study, together with researchers from the Oceanogràfic, the increase in the acidity of the seas and oceans as one of the direct effects of climate change due to the increase of CO2 in the atmosphere.

To do so, they will work with corals and molluscs from the Valencian aquarium and will use a pioneering analysis technique in Spain, based on the use of radiotracers and nuclear instrumentation, which improves previous techniques, since it is not invasive and does not cause any damage to the species under study.

The synergy between both institutions is part of the REMO Project -by its acronym Radiotracers for the study of Marine and Oceanic Ecosystems- of which the Torre la Sal Aquaculture Institute (IATS) and the Istituto Nazionale di Fisica Nucleare (INFN- LNL) in Italy.

A multidisciplinary initiative that has funding from the Agencia Estatal de Investigación, by means of national projects, the Generalitat Valenciana, through the ThinkInAzul initiative, and the Italian INFN.

To carry out the REMO project at the Oceanogràfic, two new 300-litre aquariums will be installed in which two identical ecosystems will be recreated -with the same environmental conditions, same species and same calcium levels-, but with different acidity levels (pH).

One of the aquariums will be maintained at the current values ​​of CO2 that the oceans absorb from the atmosphere and the other will present a higher concentration of carbon dioxide -simulating the levels that seawater will have at the end of the 21st century- that will increase acidity of the water.

Carrying out this study with corals and molluscs is essential since they are organisms that build their skeletons or shells with calcium carbonate, therefore, an increase in the acidity of the water would impair their growth.

In the words of Daniel García, director of Zoological Operations at the Oceanogràfic, “working with highly controlled animals and ecosystems, such as those at the Valencia Oceanographic, offers scientists the opportunity to alter certain specific parameters to find out, in this case, what will be the effects of climate change on marine fauna in the coming years. Studies impossible to complete and measure in the natural environment”.

A pioneering analysis technique in Spain and not harmful to animals

The innovative part of the project lies in the analysis of the calcium captured by these invertebrates through a detector that will be developed by the IFIC with nuclear technology.

To do this, a radiotracer dissolved in the water -radioactive Calcium-45 that does not disturb the study- will be used, and the amount captured by the animal will be measured in a way that is not harmful or destructive to the animal itself.

This novel technique will also make it possible to monitor calcium uptake in the same individual throughout their growth and development. This is a practice not yet developed in our country. In addition, the IFIC group aims to implement its use in other fields of scientific research with marine ecosystems such as nutrition, parasitology, microbiology and ecology in collaboration with ITS scientists or other institutes dedicated to the Marine biology.

This advance will also allow a better understanding of calcification in organisms, including the human body, which will serve to define advances in biotechnology in the field of medical sciences.

As Enrique Nácher, CSIC researcher and coordinator of the REMO project, mentions, “This is a markedly interdisciplinary collaboration. Only by bringing together a group of nuclear physicists with marine biologists and veterinary experts in conservation can a project like this be carried out”.

The REMO Project and its studies at the Oceanogràfic will last three years.

The first phase will begin in the second half of 2022 with the development of the controlled ecosystems of Mediterranean molluscs -due to their impact on the local economy- and tropical corals -the most affected by climate change-. At the same time, the beta detector for the detection of radiotracer in animals will be developed. The first measurements, with the developed ecosystems with different acidity, will be carried out during the first half of 2023.

The second phase of the project is scheduled for mid-2023 and will focus on analyzing the effects of climate change, but this time by modifying the temperature and acidity of the water in the aquariums.

Understanding how ocean acidification and global warming can affect the marine ecosystem provides extremely valuable scientific information that will enable informed decisions on how to address and, where possible, mitigate these changes.

The consequences of ocean acidification

The acidification of the seas and oceans not only threatens the marine environment, but also food security and the economy.

60% of the world’s coral reefs are in danger as a result of human activity and it is estimated that, at this rate, more than half could disappear by 2030. 25% of marine biodiversity is found in coral reefs. A deterioration of these affects biodiversity globally.

Corals, like some molluscs such as mussels or conch shells, deposit calcium carbonate in their skeletons and shells, and an increase in the acidification of the water would affect them throughout their development and especially in the early stages, altering their growth and making them, for example, more fragile and vulnerable to predators.

A chain reaction that would affect biodiversity and the balance of the marine ecosystem and, consequently, that of the entire planet.